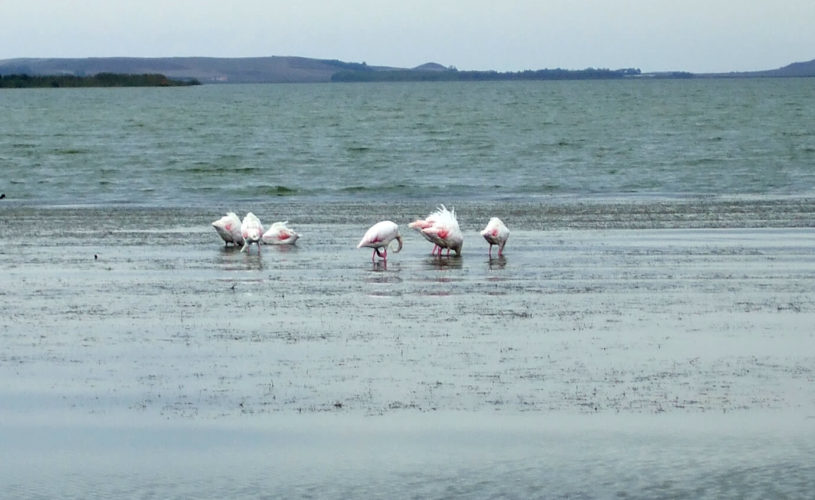 Naturalistic tourism in the Sinis Peninsula for the next week:
Tuesday 21 March
– 3.30 – 6.00 pm, “The Phoenicians Peninsula”, hiking tour in Capo San Marco.
Thursday 23 March
– 3.30 – 6.00 pm, “Flying silhouettes”, birdwatching tour in Pauli ‘e Sali pond.
Saturday 25 March
– 9.30 – 12.00 am, “A plunge in the green”, hiking tour in Seu promontory.
Sunday 26 March
– 9.30 – 12.00 am, “The barefoot fishermen”, guided tour in Cabras lagoon and Pontis fish farm.
You can find the schedule of planned activities and other information about our services also on www.aleambiente.it website.

Pina and Stefania, we are a mother and a daughter that one day decided to open a guesthouse in Cabras. Our main passion was to socialize, talk to people and entertain friends and family with us.
One day, looking at us face to face we said that would not be a bad idea to follow this path and open the doors of our home to “the World.”
In 2003 we started our adventure …. Beautiful and still alive, pursued with even more passion than before.
Even today, after almost 15 years of activity, we find that to know people from all over the world is a great thing and enriches us with every passing day.
The Cabras area offers many things, mainly in the summer you can visit the many beaches just a few kilometers from our House.
I still remember (now Stefania’s speaking) when I was child, on Sunday my parents used to bring us to the beach with my brother and when it was possible also the other days of the week. They filled the red panda and we were ready for the sea, the preferred area was S’Archeddu and Sa Canna (not far from the most famous Is Arutas beach) which translated into Italian is the Arch of Rods, probably so named by the farmers in that area cultivated the land right next to the sea.
We had a lot of fun, met friends, played, walked, ran and, of course, we spent a lot of  time in the water, becoming blue …….. great and indelible memories!!!!
Even today, that I am a little older, I cannot stay without the sea and the sun.
By choosing to stay here in Cabras you will find all the services and amenities you want .. From grocery stores to restaurants and pizzerias … There is also a large square near the pond where you can make beautiful walks and in season, practice Bird Watching.
Every Thursday morning right on the main square the market is set up and here you can find local and traditional products and fresh fruits and vegetables of all kinds.
In the evening, especially in the summer, there are often special events organized in the pond Square near the church of S. Maria Assunta.
In the period of May, exactly on the 24th, there is the main feast of St. Maria Assunta, which lasts on average between 3/4 days and different show  are organized every night.
Every year, on August, the “Cinema Under the Stars” is planned in San Giovanni di Sinis with a series of old and new movies, giving the opportunity to tourists and visitors to attend free watching.
Still in San Giovanni di Sinis, there are the “Nights Of Tharros” dedicated to music, often jazz.

Among other things Cabras is also well known for its food and wine, among the most important definitely is the Bottarga, the Vernaccia wine and sa merca.
The Bottarga
Bottarga is made from mullet roe and it’s dried in the air with a particular process. It can accompany fresh salads  cut into chunks or delicious pasta dishes if you like the grated grana padano but can also be enjoyed just thin slices of crusts of bread accompanied by a thread oil (the Sardinian one is excellent) or a spread with fresh butter.
Vernaccia
Vernaccia is a very old and very precious wine that is often offered in good deals, or a sign of hospitality in small cups, due to its particular and persistent taste, its content and its fullness, it can safely be called a meditation wine .
It’s a unique wine in its kind for both the grapes from which it is produced and for their method of harvesting and wine-making, by special molds that form during its aging in barrels.
In Cabras it is possible by appointment, visiting several companies that produce it, and you can taste it, perhaps as an accompaniment to the sweet typical or traditional cheeses such as pecorino cheese and carasau bread.
Sa Merca
Sa merca is an ancient dish of mullet particularly tangy due to the lake grasses that surround it and with which it is served, a method which in antiquity guaranteed their preservation and freshness after cooking.
The name of the dish comes from the grass used, indeed, for the preservation of mullet, “Sa merca”, also called “Sa ziba” that in addition to keeping intact the organoleptic characteristics of the fish keeps it soft and the spices.
The dish originated among anglers especially in the area of Cabras and Riola, is unfailingly prepared during the most important religious festival in the country: La Corsa degli Scalzi in honor of San Salvatore, a kind of historical re-enactment – the defense of the religious statue of the saint in 1619 by the “Scalzi” so called because they face the procession barefoot, against an invasion by the Moors.

The beaches of Cabras Territory
San Giovanni di Sinis
Diving, snorkeling and surfing are just some of the activities you can do in the San Giovanni di Sinis beach but also hiking, long walks or mountain biking and relaxation immersed in an area that offers in addition to sports, different points of dining and convenient parking possibilities for cars, buses and campers. Around, beautiful greenery framed by dunes and cliffs.
It was once famous for its fishermen features shacks built of wood and rattan, today is the destination of many tourists, who in addition to the sea and the sun, want to visit also the surroundings. At the entrance of the village of the same name you can admire the early Christian church of San Giovanni, one of the oldest of Sardinia, the Phoenician-Punic ruins of Tharros and those of the Spanish tower of St. John.
Is Arutas
A beach composed of tiny grains of quartz with changing colors, from light green to white and pink, perfectly rounded by the erosion of the sea. Is Arutas is located in the town of Cabras, also famous for its winds, making it a favorite destination for surfers, even in winter.
From some years the entrance to the beach is forbidden to smokers, who risk fines of 360 Euros if caught in fragrant and in the same beach and in those of the district consist of quartz grains and shells, it is forbidden to take away the characteristic sand, worth up to 100 euro fine.
The Is Arutas beach has some facilities such as car parks, some bars and a campsite.
Maimoni
Maimoni like Is Arutas is characterized by grains of quartz, but is more suitable for children, since the sea bed, unlike IsArutas that has undergone profound, become progressively deeper as you move away from the shore. Near the beach is the famous village of San Salvatore. Thanks to its winds, even Maimoni, is the destination for surfers. The beach is equipped with ample parking and bars.
Mari Ermi
Mari Ermi is the ideal beach for surfing and windsurfing, but also for children, thanks to its shallow waters which degrades slowly. Consists of a bright white quartz sand is one of the most popular beaches for tourists.
Enclosed by high dunes, it stretches between the sea and the pond of Mari Ermi.
It has a large parking, dining options and a campground.
Island of Mal di Ventre
The island of Mal di Ventre is an environmental paradise of pristine beauty, it is covered by a low Mediterranean spot, made of rock rose, mastic, rosemary and tamarisk, populated only by turtles, hares, and several types of birds that nest there, characterized by the exceptionality of the natural values ​​that characterize it it became a protected marine area of ​​the Sinis.
The only evidence of human presence on the island can be identified by the presence of the remains of a dolmen at Cala del Nuraghe, and some dry-stone walls of the huts used by shepherds during the winter for storing the flocks, Cala dei Pescatori. While in Cala Wreck, less than a mile from the beach, it is the wreck of a small cargo ship after the war, today, visited by those who practice diving.
The island can be visited thanks to the many operators in the area who organize day trips in the summer.
Boats leave from centers of Mandriola, Putzu Idu, and the marina Torregrande.
Torregrande
The Marina of Torregrande is a village in the municipality of Oristano known for its waterfront and its nightlife, offering both day and night to tourists almost all services necessary to a well-organized seaside resorts without the need to travel by taking the machine.
Several amusement as ristopub, discos, pizzerias, souvenir shops, ATMs, supermarket, camping sites, hotels, traditional taverns, luxury rooms and a doctor, are concentrated in the central street of the village and the seafront.
The symbolic monument from which the place take its nameis the great Spanish tower that dominates the center of the agglomeration settlement, built for the defense of the landing to the Gulf of Oristano.
The beach of Torregrande consists of gritty sand (about three kilometers), in 2013 he was awarded the blue flag and it is among the busiest in the province of Oristano. This thanks to the excellent public transport links to the city of Oristano and Cabras with Marina di Torregrande.

Every year, on the last Sunday and Tuesday of Carnival, in the main town of Oristano, there is the race known as equestrian to the star: The Sartiglia. The event annually draws thousands of tourists who turn the city as it prepares to this event throughout the year and goes on with the same enthusiasm from the fifteenth century. A.D.
The Sartiglia on Sunday is organized by the Gremio of the Farmers, on Tuesday instead the event is under the direction of the Gremio of the Carpenters. END_OF_DOCUMENT_TOKEN_TO_BE_REPLACED