The Tradition of the Area

The Baretfoots Run and the feast of Saint Salvatore 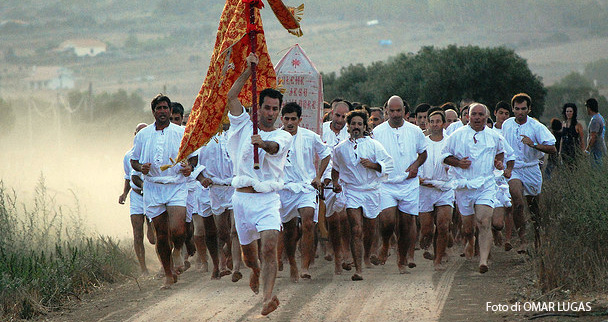 In the last weeks of August, a group of women in traditional costume and barefoot, carries in a procession the statue of the saint from Maggiore church in Cabras to the sanctuary of San Salvatore, where religious rites were continued for nine days.
The race itself starts at dawn on the first Saturday of September.
Procured "s'abidu" (robe of belonging brotherhood) the youth of the country are found in the churchyard of the Maggiore Church of Cabras, from where the statue is carried in procession to the outskirts of the village.
At this point "is curridoris" (runners) bind "s'abidu" at the waist, covering the litter that surrounds the statue of the saint and start the race barefoot to the village of San Salvatore di Sinis.
A "muda" consists of two young riders holding the sedan with the simulacrum, and no one will have groped to overcome it. Every hundred meters is given the exchange rate and on the way chanting "Viva Santu Srabadoi" (San Salvatore).
Arrived at the village "is curridoris" are welcomed by hundreds of faithful and tourists in an explosion of joy and intense colors that make the experience even more exciting event for the lucky bystanders.
The same ritual took place the following Sunday with the opposite route to bring the Holy One in the town, where the crowd of faithful, the curious, fans and tourists are waiting for them and will create the procession that will end at the front of the churchyard of the church of Santa Maria Assunta.
The following Monday the women in procession bear the statue in the Maggiore church.
The ritual of the race barefoot wants to be a good omen for the harvest, the abundance of fish in the pond and the fertility of the flocks. 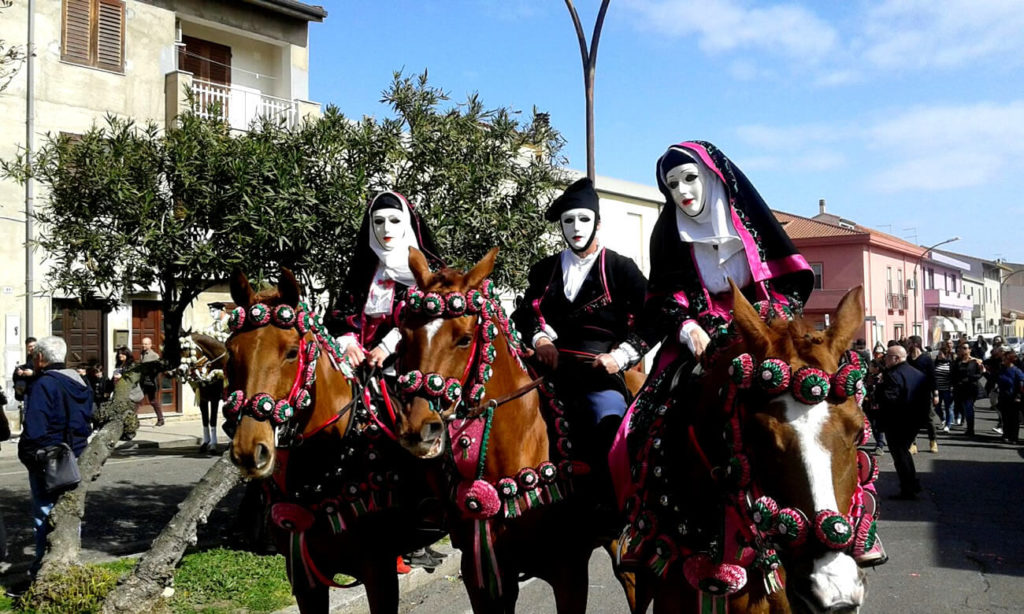 Every year, on the last Sunday and Tuesday of Carnival, in the main town of Oristano, there is the race known as equestrian to the star: The Sartiglia. The event annually draws thousands of tourists who turn the city as it prepares to this event throughout the year and goes on with the same enthusiasm from the fifteenth century. A.D.
The Sartiglia on Sunday is organized by the Gremio of the Farmers, on Tuesday instead the event is under the direction of the Gremio of the Carpenters.
The ancient rite wants that at Candlemas, the feast during which they blessed candles, Gremi or the ancient guilds of Arts and Crafts, during the religious Mass choose Componidori, namely the Cape Race, the one who will have the task of leading the race to the star and bless the city.
Before the Sartiglia’s race the day begins with the Dressing of the Cape Race, a long ritual where Componidori, accompanied by drummers and trumpeters that mark the rhythm of this ceremony, prepare to wear the striking androgynous mask that will lose identity and features mundane to knight. With the help of Massajeddas, a group of women who will have the task of dressing the Cape Race, the mask will be sewn and fixed according to a very ancient process by skilled hands, trained specifically to the fulfillment of the gesture.
From the moment the Componidori will have this endowment and jump on his horse he can never touch the ground until the end of the event. Followed by a long parade of the Court in ancient medieval dresses and in typical Sardinian costumes adorned the most luxurious jewelery and expensive fabrics, he will ride along the streets of the city to the square of the Cathedral together with Cape Race that will bless the city and the crowd with a kind the scepter called "Sa Pippia and Maju" a special bouquet of flowers with two heads made up of about two thousand violets tied together by a green belt.
After the blessing of the city and the bystanders the long-awaited race will take place in the central street of the city, open by another ceremony where Componidori, crossing his sword three times under the star, with the first rider choosen from him for the descent, gives officially allowed the rider to try their hand in the enterprise to be able to take the pierced star with his sword, riding along its wild ride.
Each rider, starting from Componidori, will groped to take the star because more stars will be collected by the knights and more will be a good omen for the entire city, not to mention the great prestige suffered by the Gremio in having a number more stars than those collected by their opponents.
Once all selected riders have completed their descent the race ends with Componidori that in an acrobatic and at full speed ride along the Via Duomo, leaning back on the back of his horse and once again blessing the crowd knows Pippia de Maju.
The event continues with The Pariglie in via Mazzini, a spectacular juggling and riding skills test where, in groups, the riders of the same team and with their traditional costume, perform stunts like human pyramids or other incredible figures on their horses while these whizzing galloping by the way.
The day of Sartiglia finally ends with the Undressing, ritual that closes the event and return the robes of de Componidori is Massajeddas to the applause and the emotion of the audience, thus opening the festivities that go on for the whole night.
This incredible event is revived with different protagonists on Tuesday following, headed by Gremio precisely opposite to that which led Sunday's race and a bit softer version even by children that depict a Sartiglia of their own, often no less spectacular.
The event attracts tourists and fans from all over the world and the day of August it is proposed a taste in summer version in the long sea walk of Torregrande, to publicize the event to those who still have not heard about it.